Best Case: Corey Crawford is really that good, it's Stan Bowman (not Ray Shero) who is the boldest and craftiest GM of the salary cap era, and this is definitively the Toews/Kane (not Crosby/Malkin) decade. 3 Cups in 5 years.

Prediction: We spend a lot of time pining for yet also dreading a dream Finals matchup between the Hawks and Pens.

The rest of the Central after the jump...

Do we stay up and watch a lot of West Coast games? Not really. But still.  Here's our Pacific Division Preview.  Take it to the bank.

Best Case: The Ducks continue to get lights-out goaltending from Hiller and Fasth and career years from the twin towers, Getzlaf and Perry. A weight has lifted with the departure of Bobby Ryan. Bruce Boudreau still has goodwill in the locker room and at the local Sbarro.

Worst Case: THEY TRADED THE WRONG GUY. Listen, we know the cap is expected to go up, they're still only 28, centers are more valuable than wingers, etc., etc., yada yada yada. But 8 years, $66M for Getzlaf, and 8 years, $69M for Perry? Yikes.  Some context for the next time you hear complaints about the Crosby contract: Perry is essentially the same cap hit, but he's also 2 years older, a winger, never scored 100 points, and had 20 fewer points that Crosby last season despite playing in 6 more games than Sid.  Perry's 2010-11 MVP trophy might as well be a big bronze asterisk.

Prediction: More male pattern baldness. Boudreau still can't get a good team over the hump in the playoffs. 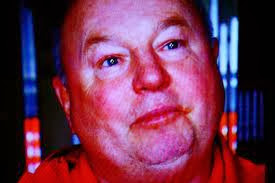 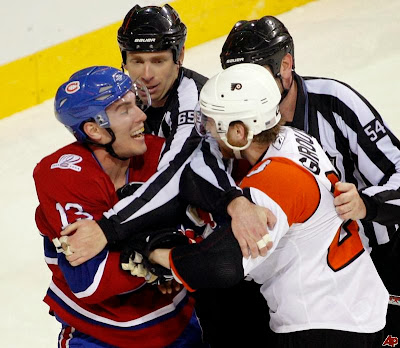 Prediction: Pain.  And a lot of time by us spent on Capgeek figuring out trades for Cammalleri.  And by a lot of time, we mean A LOT OF TIME.

Much more after the jump...

The NHL season is days away, and that means it's time to invent over-unders.  Here are the only 12 over/unders you need to know for this year.

This is MAF's career GAA, and is only .01 lower than Fleury's GAA in 2008-09 when, you know, he was good.  It is also almost a third of a goal higher than it was last year when Fleury was, you know, not good.  For most things, numbers only tell part of the story -- with Fleury, they might not tell any of the story.

Fleury could win 45 games this year and post a sub-2.00 GAA and we still wouldn't be confident in him going into the playoffs.  He could post a 3.33 GAA in the regular season, stubbornly be named the unconditional starter for the playoffs, and we'd feel the exact same way.  Our lack of confidence in him is a drag on the season, and only a strong performance in the playoffs (or a trade) can cure it.

(Side note: ignore anyone who tells you that Fleury was lucky to win a Cup because his GAA was higher in 2008-09 when he was winning the Cup than it was in 2013 when he gagged.  He wasn't lucky.  From 2007-2009, Fleury was a money goalie who could shrug off adversity.  Now, he can't.  That doesn't mean he was bad then, it means he isn't as good now. Steve Blass was an All-Star before he wasn't).

Finesse: Under. I think he will have a relatively pedestrian regular season and then a who-the-F-knows postseason.  Scuds will help.  Pencil him in at 2.54 GAA.

Eleven more over-unders after the jump...

You might think it was a pointless exercise for Steelers leaders last week to ban young players from playing ping pong and pool in the locker room. Like maybe there were other things they could have done -- things like "blocking," "not fumbling," and "not sucking" -- to put the team in position to win on Sunday. Well, that's really easy for you to say in retrospect, isn't it? You're not helping. When morale is low, when the men need something to believe in, that's when telling Shamarko Thomas he can't enjoy a friendly billiards match can mean so much. We believe General Ben, Commandant Key et al. didn't go far enough. Here are five leadership actions the '08ers need to take right now to halt a slide that could see them become...the 0-8ers.

5. No food for anyone with less than 4 years in the league.

Tell them they're mocking the wrong Rooney.

This may seem counterintuitive. But the bad press and sideline spats don't seem to be making the offensive coordinator any more effective. Lay down, pull him close, stroke his hair. Bring down his walls and open up his playbook. You might just learn something about tenderness.

The Steelers may stink, but it's nothing a little Leadership can't fix

When President Franklin Roosevelt felt the winds of war blowing toward the United States in 1940, he did not take concrete steps to prepare the country for eventual victory in the inevitable war, such as instituting a draft or committing to the largest military buildup in U.S. history or funding the Manhattan Project.  No, he did what any good Leader does when faced with a tough situation: he doubled down on Leadership.

Building upon FDR's great lessons in Leadership, America's next great Leader -- Ben -- must Lead his Men out of an 0-2 start.

In the wake of Monday's embarrassing 20-10 loss to Cincinnati, Ben did not Lead by proposing tactical changes to surprise the enemy Bears this coming Sunday.  Instead, he just stepped back so that he could see his enormous head in the mirror, looked at said enormous head, and thought to himself, "what this team needs is more Leadership."  Taking a cue from that time in 1941 when FDR gathered his military commanders and showed them pictures of Woodrow Wilson, Ben revealed to 93.7 The Fan:


“We’re going to sit down and talk and figure out a way to right the ship and make sure that these young guys know that this is unacceptable,” he says. “And it starts with all of us older guys. Maybe us older guys need to revisit it ourselves, because we need to find a better way of letting these guys know what it means to be a Pittsburgh Steeler.”

“Maybe that means bringing in the Lombardi [trophies] and setting them in the team meeting room and putting up the Hall of Fame pictures and all that stuff.”

To prepare for the confrontation with the young whippersnappers who just don't understand that it is unacceptable to not have a lot of talent, Ben brought muskets from World War 1 to the UPMC practice facility convened his advisory council.  This group of fearless Men is known affectionately as the '08ers because they are the Men who forego no opportunity to remind you that they were on the team for the 2008-09 Super Bowl season.  As explained in the Post-Gazette:


The 0-2 start and how it was achieved prompted two team captains, Ben Roethlisberger and Ryan Clark, to call a meeting of the 2008ers -- those 10 remaining players from their most recent Super Bowl victory -- to discuss matters.

"It's not like it's a magic solution and we are going to have a talk in this meeting and everything is going to be fixed," Roethlisberger said. "It's more about getting together, coming up with solutions and things that we can bring to the team. I feel like that's the thing we should do as leaders."

Roethlisberger added that "it's not a panic-type thing."

Ben is right.  There's no need for a panic-type thing when you have the '08ers.  Even if they might soon be the 0-8ers.


UPDATE: The '08ers have banned anyone with less than 4 years of experience from playing ping pong in the locker room.  This is similar to when, on the eve of the Battle of the Bulge, FDR forbade his Chiefs of Staff from playing Skully in the Situation Room.

We told you last week in our funeral service for the 2013 Steelers that this season was over.  Last night's game, and the 14 more still to come, might as well be the dead actor montage from the Oscars.

If we were super lazy, we'd summarize the top 10 things that went wrong with last night's game as follows:

But we're only regular amounts of lazy, so here are 10 other things that really stunk about last night's loss to the Bengals:

10. The game was on national TV.  Not only does the game not start until 8:30 (meaning it doesn't end until well after 11pm on the east coast), but it exposes the entire nation to the sub-mediocrity that is the 2013 Steelers.  But who knows, maybe a good public shaming is what the Steelers need.

9. The Steelers have three more national TV prime time games, and at least three more that (likely) will be the feature 4:25pm game on CBS (vs. Baltimore, at New England, at Green Bay).  Those should be great fun.

More on Ike and the Steelers after the jump...

Podcast: Mourning the end of the Steelers' season, plus the Pens start scrimmaging

We mourn the end of the Steelers' season and react to the Pens' intra-squad scrimmage. Some unreal segues in here.

You can listen below or on our Spreaker page.  If you want to take the podcast mobile, either click here to subscribe on iTunes, or download the Spreaker app for iPhone or Android. 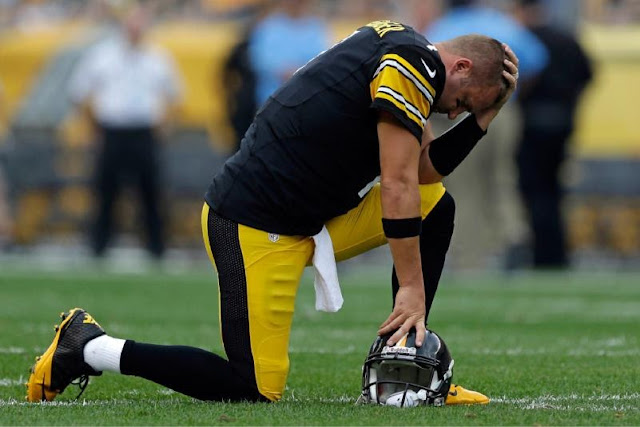 The Steelers need Ben to be more than just Ben

To GTOG, what makes Ben Ben is that he's completely unaware that he's a parody of himself.  He's the kind of guy who doesn't realize Kenny Powers isn't a real baseball player.

Read on for more about Ben being Ben.

It's our annual Steelers preview, where we go through the schedule game-by-game, and then people tell us we're being too negative.  But this year, we get so into it, that we actually run out of tape.  It's the GTOG Podcast.

Listen below or click here to go to our Spreaker page. 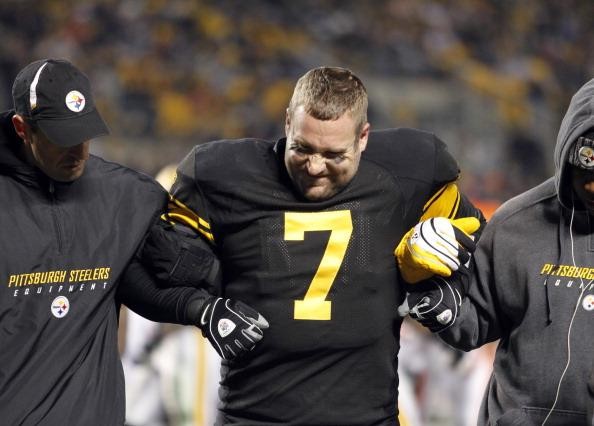